Chunk Five is a great font from The League of Moveable Type. It’s a nice slab serif that works perfectly for headlines. I recently wanted to use it for a project but there was a major deal breaker: the font has no accent and is missing a lot of characters. Very disappointing. But the cool thing, is that this font is open source: not only it can copied or embed as a webfont, but it can also be modified!

Because I love open source and I love this font, I spent the week-end adding the missing glyphs to Chunk. My version of the font has now twice more glyphs than the original (from 85 to 170). However, it’s still missing many glyphs and it might be buggy.

If you want to give it a try, just download Chunk Five with accents. 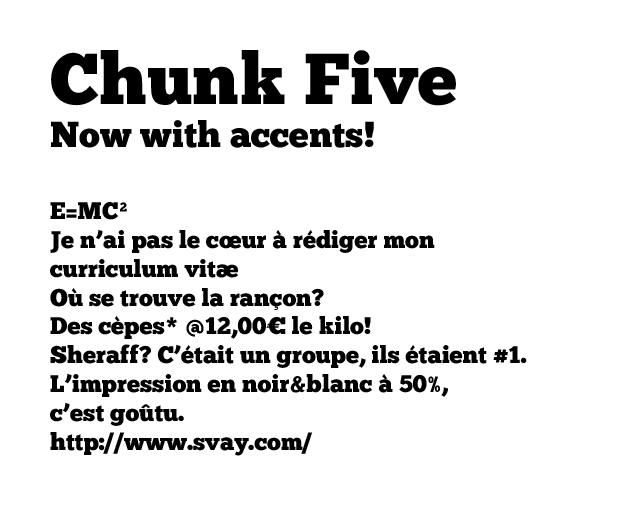 Thanks for this! YAY!

hi!
great stuff! thanks. If you could add the Norwegian characters ø and å too, I would be well happy. (æ was not enough for me 😉

Thank you for your updated Chunk Five font!

We are trying to use it on http://demos.mozilla.org.

We need eot, svg, ttf and woff formats. Can you help us in https://bugzilla.mozilla.org/show_b…

Really nice, that’s exactly what I was looking for, tanks dude

This is great, makes the font WAY more useable for the web. Merci from Vancouver!

Hi, Meredith who created this font sent me here and told me that you might have the solution for us? Mike Kus is doing a wonderful job with our Marketing pages and used Chunk Five. We ned the Swedish letter å , ä , ö to be included in Chunk Five to be able to use it on our website. Can you help us? We would be extremely grateful.

Thanks Maurice for your work. I was puzzled by Ditte’s comment because the version of Chunk I downloaded does have å , ä , ö. I think I’ve found out the reason for the confusion. If you click on the picture in the article, you receive v0.1 of the font, but if you click on the text “download Chunk Five with accents” in the article then you get v0.2, which does contain the characters you’re looking for.

Hi mates! I work for a Brazilian newspaper and we would like to use in some of ours products Chunk font. So, in portuguese language we use in some words these kind of accents: õ ã… We noticed that in this chunk font we cannot have this type, how can I manage to sort it out? Sincerely yours. Fred.

Hi Maurice, really love your job!
This font is cool, but missing some characters.
Would you be so kind please and could you add CE characters?
Such as: ěščřžýáíéůúťďň + ĚŠČŘŽÝÁÍÉÚŮŤĎŇ

I would do this, but dont know how 🙁